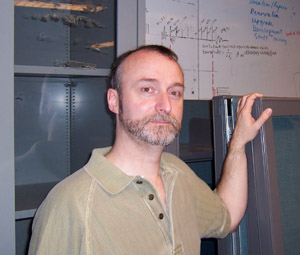 John S. Harwood was born in England but relocated to the US with his family in the 1960's. He attended the University of Texas at Arlington, graduating with a B.S. in Chemistry in 1983 and a D.Sc. in 1988. During his undergraduate studies he became interested in NMR spectroscopy and his graduate work involved the application of NMR to research in the area of physical-organic chemistry. After completing his graduate study he held two postdoctoral positions, the first at U. T. Southwestern Medical School (Dallas, TX) and the second in Alex Pines' group at U. C. Berkeley.

Dr. Harwood's first permanent position was with the University of Georgia Chemistry Department where he was manager of their NMR Facility from 1991 - 1993. He then moved to the University of Illinois at Chicago (UIC) where he was first manager, then director, of their Chemistry Department's NMR Facilities. During John's tenure at UIC the NMR Facility grew from two laboratories with three spectrometers to three laboratories housing seven spectrometers, four of which were state-of-the-art (at the time) UNIX-based machines. John was also temporarily the Director of the department's computational Facility (1996 - 1999), and served on various campus-wide committees during his time at UIC.

Dr. Harwood relocated to Purdue University's Chemistry Department in July 2005 to take over the position of Director of PINMRF. He is married to Cindy Harwood (who works for the Purdue Chemistry Department as a Lecturer), and they are the parents of twins Shelby and Ian. They also share their home with three guinea pigs, three cats, and the denizens of a fresh-water fish tank. John's interests include cars, music and stereo equipment, DIY auto and home repair, and cooking.